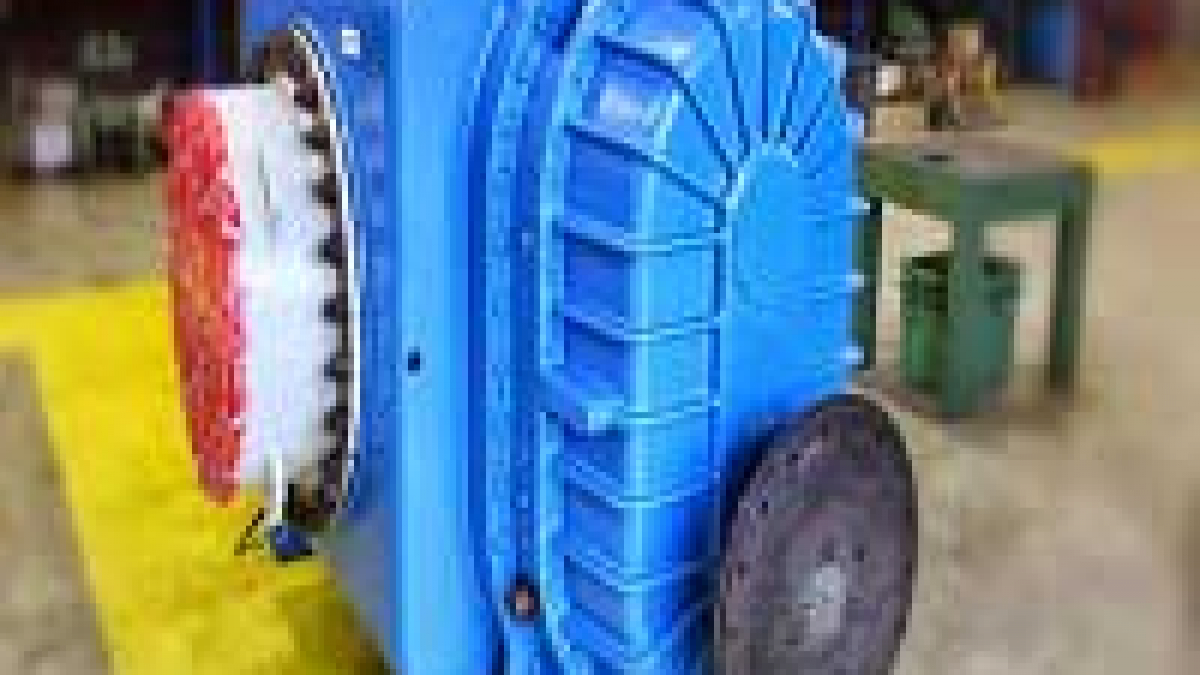 What is the difference between vane pump and gear pump? 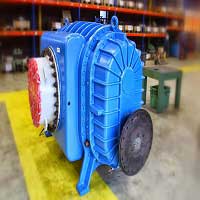 What is the difference between vane pump and gear pump?

First, a bit of background. Positive displacement (PD) pumps were developed long before centrifugal pumps. Greek mathematician Archimedes is said to have invented the first screw pump around 225 B.C. The operation of PD pumps is signified by the displacement of a known quantity of liquid with each revolution of the pumping elements, which can include vanes, lobes, gears, rotors, screws, etc.

The liquid is displaced through the spaces that are created between the PD pump’s specific pumping elements. After the liquid is collected in this space, the movement of the pumping elements transports it to the discharge port. In general, this method of operation allows PD pumps to handle liquids with viscosities up to 1,320,000 centistokes (cSt)/6,000,000 Saybolt Seconds Universal (SSU); capacities up to 1,150 cubic meters per hour (m3/hr) or 5,000 gallons per minute (gpm); and pressures up to 700 bar or 10,000 pounds per square inch (psi).
a chemical processing facilityImage 1. The operational and energy-efficiency capabilities of positive displacement sliding vane pumps, like those seen above in a chemical processing facility, can help operators successfully overcome processing issues. (Images courtesy of Blackmer)

Today, according to the Hydraulic Institute, pumps account for nearly 27 percent of total electricity use in the industrial sector. While centrifugal-style pumps remain the most-used technology in industrial fluid-handling applications, there is no “one pump fits all” solution. This opens the door for operators to consider the benefits PD pumps can offer from an efficiency and energy-savings perspective, even in applications that have traditionally relied on centrifugal pumps.

When making the final choice in pump type, several crucial factors need to be taken into account, including required flow rate, suction and differential pressure, temperature, viscosity, weight and corrosiveness of the liquid being handled. In addition, facility managers too often choose oversized pumps as a fallback under the erroneous belief that such equipment will address future capacity needs.

While the majority of the world’s pumping tasks may be performed with centrifugal-style pumps, PD pumps can become a top-of-mind choice when facility operators are apprised of the functionality PD pumps can offer users, including:

PD pumps are inherently self-priming. Centrifugal pumps must be pre-primed. Industrial facilities can design their process around this by including pre-fill cycles, minimum tank levels or expensive below-grade installations. On the other hand, industrial facilities can reduce or eliminate these considerations by using a PD pump that is inherently self-priming. This capability allows the PD pump to draw a suction vacuum and compress air into the discharge piping, all while dry running. This enables the pump to be used in top-offload suction-lift installations or with long sections of suction pipe.
PD pumps can line strip. Product recovery is critical for both safety and cost savings. PD pumps left on after a batch cycle can evacuate the suction and discharge piping, preventing product spillage when the pumps are maintained or when an operator disconnects a hose. This is a critical safety advantage. Further, PD pumps can extract costly products from the bottom of supply tanks (known as the liquid “heel”). The site may purchase an entire tanker, but a portion of the liquid may be left behind by centrifugal pumps, which creates the risk of product cross-contamination, as well as increased tank-cleaning costs. PD pumps can also recover liquid from within the piping system.
PD pumps are insensitive to the system’s pressure fluctuations. Some operations feature a batch process, have high backpressure or struggle with operating near a centrifugal pump’s best efficiency point (BEP). PD pumps do not have a BEP and are immune to any system pressure fluctuations.
PD pumps are viscosity flexible. There is no reduced performance at increasing viscosity (or decreasing viscosity for ultrathin multiphase liquids). PD pumps can operate continuously at 0.2 centipoise (cP) or 200,000 cP viscosities. In fact, many PD-style pumps can be used on a thin solvent and on thick crude oil, which makes them ideal for liquid-terminal or bulk-transfer applications.
PD pumps operate at reduced speeds. This capability reduces the surface velocity of rotating seal faces and improves seal life. PD pumps often require less than 500 revolutions per minute (rpm), which yields slower sealing velocities, friction-heat buildup and the cooling-lubrication needs of the seal. The result is that seals are more robust, resulting in longer component life and reduced maintenance costs over the life of the pump.

PD pumps are available in two categories—reciprocating and rotary, with rotary pumps consisting of single- or multiple-rotor configurations.

This article will address rotary PD pumps. By their design and operation, rotary pumps displace a fixed quantity of liquid for every rotation of the pump shaft. Again, vanes, lobes, gears and screws are among the pumping elements that can be used to facilitate the transfer of the liquid.

Within the single-rotor rotary-pump family tree resides sliding vane pumps. The design of the sliding vane pump places a series of metal or plastic “vanes” in dedicated slots in an offset rotor in the pump casing. As the rotor spins past the suction port, the vanes are forced out of their slots and ride against the inner bore of the pump casing, forming pumping chambers.

The pumping chambers trap the liquid and transport it around the pump casing to the discharge port, where it flows into the discharge piping. This design virtually eliminates product “slip” (the movement of the fluid being handled against the direction it is being pumped), meaning that the pump’s high volumetric efficiency is maintained.

Based on their self-compensating design that accounts for pumping element wear through the extension of the vanes during operation, PD sliding vane pumps are energy and mechanically efficient. Other operational advantages of sliding vane pumps include:

Rotary self-compensating sliding vane pump technology was developed in the early 1900s by an engineer who was looking for a solution to ill-performing gear pumps that were consistently wearing and losing volumetric efficiency, leading to product slip that hampered flow rates.

At the time, gear pumps were far and away the most common type of PD pump used in industrial liquid-handling applications. There are two typical types of gear pumps: internal and external gear, both of which transport liquids through the action of a series of gears coming into and out of mesh. While the pumping action for both is comparable, external gear pumps use two similar rotating gears to mesh, whereas the internal gear pump uses a drive, or rotor, gear operating against a smaller internal, or idler, gear.

Both modes of gear pumps possess some advantages that are similar to sliding vane pumps—nonpulsing, self-priming and dry-run capability; ability to handle thin liquids at varying pressures; and ease of maintenance.

But because of the style of operation, gear pumps wear as the pump’s gears mesh, or come into contact with each other, to move fluid. This increases the internal pumping clearances, reducing flow capacity that results in less fluid pumped per rotation while simultaneously increasing slip within the pump. To compensate for these larger clearances the pump speed or size must be increased, which can result in higher energy consumption and accelerate the pump’s wear.

The alternative in this gear-wear scenario is to tolerate a lower level of pumping capacity until the pump’s performance drops to an unacceptable level.

However, the gear wear can often go undetected by the operator, which can sap the pump of efficiency—both energy- and performance-related—before the necessary maintenance can be performed.

Conversely, because the self-compensating vanes in the sliding vane pump continuously adjust for wear, they can allow the pump to maintain near-original efficiency and capacity throughout their life. The pump speed also does not need to be increased over time, making sliding vane pumps natural energy-savers.

If the sliding vanes wear out or are damaged, replacing them is quick and easy. Vane replacement can be accomplished by simply removing the pump’s outboard head assembly, removing the old vanes, inserting new ones and reinstalling the head, all without the need for special tools. Also, it is not necessary to remove the pump from the system. All replacements can be completed while the pump remains in line.
Future Energy Consumption Predictions

To the surprise of probably no one, in its International Energy Outlook 2017 report, the U.S. Energy Information Administration (EIA) predicted world energy consumption would rise 28 percent between 2015 and 2040, from 573 quadrillion British thermal units (Btu) in 2015 to 736 Btus by 2040. This extrapolation is supported by the EIA’s “Reference case,” which “assumes continual improvement in known technologies based on current trends and relies on the views of leading economic forecasters and demographers related to economic and demographic trends for 16 world regions based on Organization for Economic Co-operation and Development (OECD) status.”
world energy consumptionImage 3. According to the Energy Information Administration’s (EIA) International Energy Outlook 2017, world energy consumption will increase from 575 quadrillion British thermal units (Btu) in 2015 to 736 quadrillion Btu by 2040. This will put pressure on operators in the industrial sector to optimize energy consumption while still satisfying demanding production rates.

What is the OECD? Founded in 1961, the OECD is an intergovernmental organization that is committed to stimulating economic progress and world trade. There are 36 OECD countries, including the United Kingdom and the United States.

The main reason behind this steady increase in energy consumption should be equally obvious—the world’s population continues to increase, with the United Nations’ Department of Economic and Social Affairs saying that the current population of 7.6 billion people will expand to 8.6 billion in 2030 and 9.8 billion by 2050. This consistent population growth is most significant in developing, non-OECD countries, and is being driven by improvements in infrastructure, food production and health care that have created a better standard of living for many of those countries’ residents.
Meeting Demands

Today, the task of outfitting an industrial facility with pumps is so much more complex than picking a technology, turning it on and watching it go.

With demanding production schedules, tight operating budgets and environmental-safety concerns to consider, facility operators must identify and implement pumping technology that can reliably satisfy these demands, which can appear to be at odds with each other.

The operational characteristics of sliding vane pumps have held many advantages over centrifugal pumps and other PD-pump technologies in the areas of maintaining flow rates and optimizing energy efficiency—especially if the application requires the handling of nonabrasive liquids at temperatures less than 500 F (260 C) and with viscosities less than 22,500 cP.

In the end, the main goal of today’s industrial manufacturer is to improve pump performance in an era where consistent global energy consumption and population growth continue to put pressure on them to control energy usage while maintaining strict production rates. Sliding vane pumps can play a role in meeting those demands.